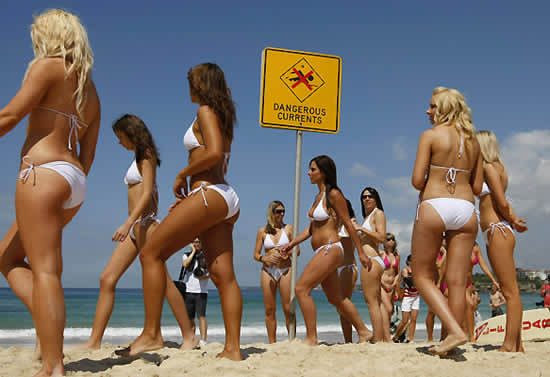 QUESTION: If you could just give 3 brief pointers to a student before he attempts to pick up a girl who’s with a group of friends on the beach what 3 pointers would you give him?

Living near the beach in California, and hanging out in beaches throughout Australia, Bali and Thailand I’ve had my fair share of beach approaches. The most difficult beach approaches I’ve done are during what I call “Topless Swedish Girl Season” which happens in February every year in Thailand.

Use the following three tricks to approach all girls on the beach, and if they’re not topless, even easier!

It helps if you’re a bit tanned and in decent shape as well, don’t let those be excuses not to approach girls on the beach but also stop lying to yourself. The time you spend reading eBooks and posting on PUA forums you could be dedicating to making yourself actually attractive.

2. Have a prop or reason to approach. If you surf, walk up with your board. If you’re promoting an event or party for your friends, perfect. Even walking up with a coconut in hand helps. It’s perfectly okay to approach groups of girls on the beach, but it’s much easier if you actually have a reason to.

For me I’ll have girls hold my guide book and take a photo for my travel blog, or ask them if they are going to the upcoming beach party. Be careful though not to get stuck talking about that prop all day and ejecting. Talk about it briefly and then transition the conversation into something more personal, and you’re in.

It seems like it would be a good idea to look cool in your sunglasses but I’ve split tested both and it’s easier to build comfort during a beach cold approach if you let the girls see your eyes.

Remember your goal is to build enough comfort with the group and then isolate the girl you actually like.

The successful beach pickups I’ve had included meeting a girl that was tanning and asking her to play beach volleyball with me after 20 minutes of chit chat, and also getting another girl to go with me to the snack bar.

Don’t be afraid of letting everyone in the group know which girl you’re interested in, it’s the entire point!